It’s a place many Vancouver Island inhabitants and visitors have heard about, but other than fisher’s and off road recreationalist’s, not many have been to Rhododendron Lake to see the Pacific Rhododendron (Rhododendron macrophyllum), a rare plant in British Columbia.


On Saturday June 25, 2011 we had the pleasure of guiding plant & nature enthusiasts from Parksville and Qualicum Beach to the exceptionally uncommon grove, located east of the South Englishman River via Northwest Bay logging road on Island Timberlands Forest land.

The road is rough in places and anyone going should be prepared for various conditions. We were very glad that our 4x4 tour van has a winch, as we could not have reached our destination without it because of a tree much to heavy to remove by hand had fallen across the road.

Pacific Rhododendrons are restricted to only two locations on Vancouver Island and a few localities in and near Manning Park on the BC mainland. Our stand of these wild, beautiful rhododendrons are believed to belong to a strain that survived the last Ice Age.

First Nations oral history may tell to have known of this place since time immemorial.

According to achive documents around 1912, George Tranfield, grandson of the first colonial settler and sheep farmer on Lasqueti Island, told naturalists about his discovery of Rhododendron’s at the bog & small lake.

Formerly known as Kalmia, the Lake was officially renamed to Rhododendron Lake in 1978 on the MacMillan Bloedel Recreation Map.

In addition we were very privileged to have a treasured sighting of 2 Bull Roosevelt Elk being respectful that we are a visitor in their home territory. Roosevelt Elk are an important part of the biodiversity of an ecosystem, however they are a blue-listed species in British Columbia. 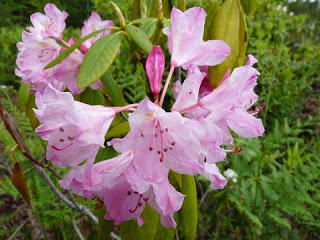 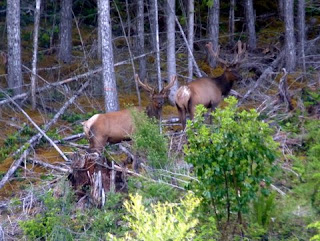 Posted by Pacific Rainforest Adventure Tours at 9:12 PM No comments: 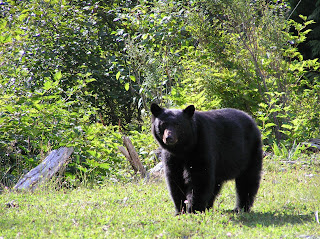 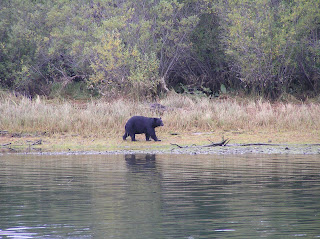 
People seeking an experience to reconnect with nature always delight to view a few black bear. Your chances of viewing wildlife are better when you know about black bear behaviour and habitat.
Black Bears are omnivorous, eating berries, fruits, nuts, flowers, leaves, roots and other vegetation as well as insects and small mammals.  During the early spring black bear can be seen grazing on grass near the edge of the roadway. On Vancouver Island during the spring, black bears also eat a large amount of skunk cabbage, horsetail and tree bark.
Summer days Black bear can be in the undergrowth feeding on berries or at the ocean waters edge, turning over the rocks along the shore to gorge on tasty purple shore crab and other seafood delicacies.
In fall, early morning and late afternoon is the most common for sighting of a black bear sauntering along the river to the estuary for a feed of spawning salmon.
Vancouver Island Black Bears have been discovered to be a separate subspecies of Black Bear, now known as the Island Bear / Ursus americanus vancouveri. Vancouver Island Black Bear population estimate is between 7-8 thousand.
Black bears vary in weight up to 600 pounds and are up to nearly 5 feet long. Fur colour varies from black to brown to cinnamon or blond. Sometimes there can be a white patch at the throat.
The most serious treat to Vancouver Island Black bear is from humans in the form of habitat loss from deforestation, development, road kills and Spring bear hunt.
.
Posted by Pacific Rainforest Adventure Tours at 12:01 PM No comments:

Every tide pool walk is exciting because there is always something different to discover. Always a highlight is the Ring-spotted Doris. Found in the lower intertidal zone and subtidal waters on rocky shores and crevices, the Ring-spotted Doris is a Nudibranch (pronounced NEWD-i-brank) belongs to the Mollusks group, and the class Gastropod.
The Ring- spotted Doris (Discodoris Sandiegensis) varies in appearance from Alaska to Southern California.  In Oceanside’s Salish Sea this nudibranch is marked with many spots and rings on a creamy to tan coloured base compared to the to the ones in San Francisco that are almost white with fewer markings.
They are carnivorous and eat anemones, bryozoans and there favorite food are purple sponges. It is both male & female. Following mating with another individual they lay a curly ribbon of white eggs in protected nooks and crannies. They only live a maximum of one year 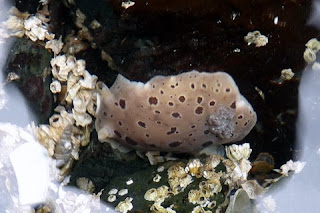 Posted by Pacific Rainforest Adventure Tours at 5:44 PM No comments:

For 21 years the communities of Parksville and Qualicum Beach have celebrated a nature festival that revolves around a chatty little black sea goose that spends the winter in Baja California, Mexico but each spring flies non-stop from Mexico to the Strait of Georgia where they have a short time to feed on eelgrass, green algae and herring roe in order to regain their weight and strength before making another non-stop flight to the Alaska Peninsula and then to their nesting grounds in Alaska, the Canadian Artic, and beyond.
One can easily observe Brant as they feed among the local bays and sheltered beaches but it is necessary that people watch for and obey regulatory signs restricting walking your dog on the beach and restricting people from walking near feeding Black Brant. The restrictions are important because humans in close proximity cause the Brant to take flight, preventing them from feeding or resting.
Pacific Rainforest Adventure Tours is an event sponsor providing Wild Shores Nature and Heritage tours during the 2-month festival that runs through March and April. In 2010, Gary & Ronda Murdock of Pacific Rainforest Adventure Tours donated proceeds of $1000 to The Nature Trust of British Columbia, the title sponsor of the Brant Wildlife Festival.

Posted by Pacific Rainforest Adventure Tours at 9:51 AM 2 comments: